It is August 13th and a whole lot of things have changed since my last blog post on February 3rd. Holy fuck, a lot has changed.

I got a promotion! I don’t have a great picture for that so enjoy this one:

I’m back on my health bullshit and back on my debt payoff bullshit. So that has been 2019 so far! Let’s see what the rest brings!

Please enjoy this picture of #wallydog doing exactly what I wish I was doing right now because….

END_OF_DOCUMENT_TOKEN_TO_BE_REPLACED

As I was trying to take pictures of Wally being cute on the couch I realized that I’ve had this pillow for over a decade.

I remember when I got this pillow and it’s a little nostalgic.

When I was in college, my mom completely redid my bedroom – including a brand new bed set.  We went to a nice mattress store to get me the actual bed frame, mattress, and box spring but everything else came from Target.  I still remember walking through the aisles of Target with her trying to figure out the best colors to compliment my as-close-to-teal-as-they-would-allow-blue.  This pillow was the only fully-teal thing I got that day!

My mom passed away in 2009 so these are the kind of happy memories I cling to.  We did a lot of shopping and eating out while shopping together and I’m happy to still have pleasant reminders around my home.

I still have everything but the mattress and box spring – I think we got the dresser and bedside table back before Target’s quality starting to really go down since they have lasted through four moves and are still kicking!  We still use the quilt on my bed and the sheets are in my closet.

It was a fond memory of shopping with my mom that still fits my home decor and I am happy that Wally likes to hang out with it.

I’m a little old school in the sense that I still carry around a day planner and an event isn’t official until it’s in BOTH my Google Calendar and planner.

This year I went with the InnerGuide 2017 Goal & Success Planner – Increase Motivation, Productivity & Happiness. Weekly & Monthly Organizer, Appointment Book & Journal (Jan – Dec) Hard Cover  Yes, the title is rather long and that’s justifiable since this planner has a LOT going on.

I find it to be the perfect planner/journal for people that like bullet journals but find the thought of creating one anxiety-inducing.

I don’t use every single aspect of this thing because I find it to be too much.  I didn’t want to go through a spiritual journey before I started putting dates in it and I’m really not good at setting intentions and as you can see – sometimes I phone them in just to not have it be empty:

I love that this journal/planner hybrid as it has a LOT of space to think – there are several note sections and “Reflections & Ideas” boxes that I will often write in just to get something out of my head.

This thing goes with me everywhere and is also a ghetto folder/wallet – I have my library card taped in the back since I lost the original and I’ve been keeping my Girl Meets Fitness workouts in the back so I don’t forget them at the gym.

How do you stay organized?  What planner/planning method do you use?

I’ve been collecting teal on Pinterest since I started the #TealTuesday hashtag.  It’s a lot of home decor and fashion just by the nature of pinterest but I find it rather calming to look at a screen of teal items.

Check out my #TealTuesday board and all of my other boards!

Today’s #TealTuesday deals with some of my favorite stuff – change!  And since change is copper and silver…how can I make this teal, you say?

This is my piggy bank!  It’s actually a bear bank.  A teal, sparkly bear bank from the Minnesota airport.  Every few months I count up my change in this bank and a burger bank I keep by the door and deposit it!  I got $6.50 out of this guy this week and deposited it in my new Wells Fargo checking for my Pay Down the Mortgage Goal

Share your piggy banks!  What do you do with spare change?

I live in a teal world.  They know me here.  Look, it was a pretty easy selling point that it was teal but it ALSO keeps me on track with fitness AND money goals!  This is now my third style of FitBit after the original charge gave me skin rashes and I lost my Fitbit One when it came off my yoga pants in an Uber  – I’ve had the FitBit Charge 2 for 4 months now and have had no issues!

Click here to be my friend on FitBit!  Let’s get in a step challenge and shit talk like a teenager in Call of Duty (without the racial slurs of course)

5 Awesome Apps That Work with FitBit

In honor of our 5th week of #TealTuesday

StepBet
ICYMI: 2 weeks ago I signed up for a StepBet Challenge that started yesterday that I bet $40 and should get that back AND THEN SOME! which will all be calculated by my FitBit.  The pot is currently at $26,520 with 663 participants and last night I met one of my stretch goals so I’m on this.

There is a similar app called Pact but they are currently having integration issues with my FitBit…so we’lll see what’s up with that in the future!

Achievemint
I use Achievemint to earn for fitness for free- link your fitness and social media apps to earn!  Sign up with my link and earn 250 points. You can earn points for logging through connected apps, posting health-related tweets, or checking in to healthy locations!

MyFitnessPal
I like that MyFitnessPal (MFP) links to my FitBit and then I get some more calories back to eat!  As of today I’m on my 51st day of logging which is probably my longest streak to date since I did Weight Watchers in 2012.  The key to health is eating mostly right and moving your ass and this app helps with that.

Walgreens Balance Rewards for Healthy Choices
Walgreens will let you link your FitBit (and other apps) to your Walgreens balance rewards so you can earn cash back for steppin’ it up!  I’ve got about $10 sitting in there right now and I usually just cash it out in $5 or $10 increments whenever I see it.  It’s basically free money back for having a FitBit!

higi
If you have seen a blood pressure station at a Rite Aid or Walgreens it’s probably a higi station.  This is how i weigh myself because I don’t keep a scale in my house and it links to my FitBit.  Honestly, the rewards for higi really suck but I like that I have to go to these to weigh in – kind of like my own ghetto Weight Watchers but without the meetings.

What do you use your FitBit or other tracker for?  Has it been beneficial? 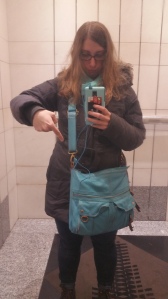 This is basically the only handbag I own.  I use this or my Under Armor backpack for all my shit-lugging needs.

I bought this Fossil Morgan Zip Cross Body Bag in September of 2014 and it has been my only real handbag since.  I still have the bag that this one replaced, but the strap was broke n so when I switch out I have to use the same strap.

Criteria for a Handbag:

Cross Body Strap.  I have to be careful about hurting my back but I NEED to be hands-free and cannot stand bags that have to be held up on your shoulder or at your elbow.  Don’t even get me started on clutches.

Zip Top.  Not only does this keep your bag from falling over/being dropped and spewing your bag full of shit all over the street but it keeps people from being able to pick-pocket you.  In a city, I need that extra bit of security.

Real Leather.  Cloth bags get dirty and fall apart a lot faster.  I need something durable that will last and so far Fossil’s leather has been doing good.  Yes, the dye is starting to wear off in some spots on this bag but you

How many handbags do you have?  What’s the oldest one you use?

So I am recovering from sinus surgery that I had last Thursday. 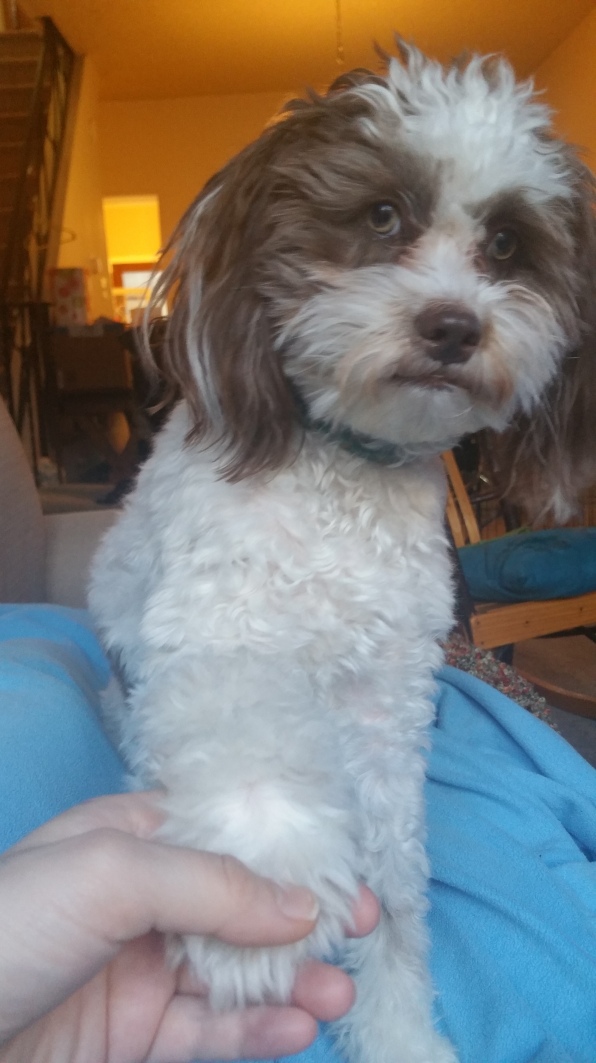 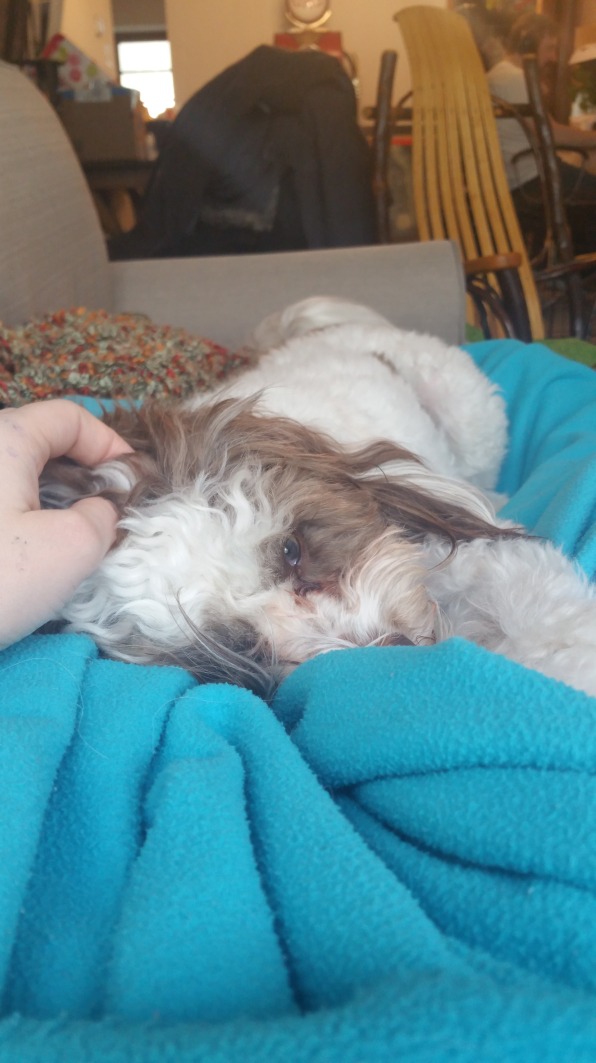 I’m in a pile of teal blankets on my couch with my dog who has a teal collar.  Most likely in my teal jammie pants.

Going through my goals – health is a huge part of that.  Here is a typical picture of me at 7ish in the morning getting ready to go do some fitness. 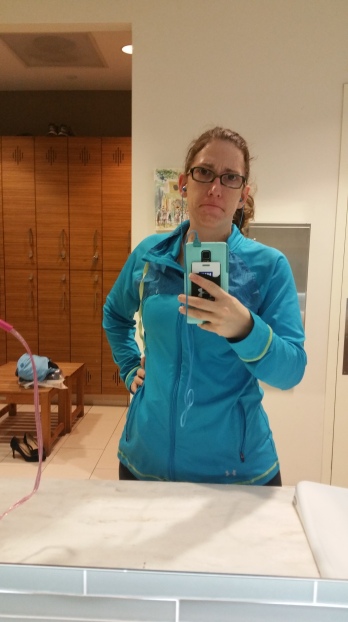 Tuesdays are also one of my gym days.  Check that sweet runner’s jacked.  I don’t run.

I’ve lost about 100lbs since 2006 and am in a constant struggle to maintain a healthy lifestyle.  I’ve had this jacket for many years and it has stayed comfortable through my journey!  I’ve had this jacket since I lived in Maryland and won’t get rid of it despite it being a lot louder than I prefer my clothes to be these days (yes, even at the gym.)  But I am making it do and getting my buff on.

I’m using a series of apps to keep track on my fitness:

AchieveMint  lets you earn points for linking your trackers and you can cash out rewards.  It takes awhile but I like it – Sign Up with my referral link and you will get a bonus!

Fitbit – my Charge HR tracks my exercise, steps, sleep, water, and heart rate.  LOVE IT.  I also love doing Challenges with my friends.  Add me and let’s step it out. (links to higi, achievemint, and myfitnesspal)

higi is where I track my blood pressure and weight.  They’re at most Rite Aids and Wallgreens.